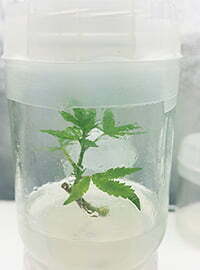 A Soothing Seed has spent months developing tissue culture propagation formula and protocols specifically designed for the cannabis species and will soon be ready to release the highest quality, and largest variety of cannabis strains to the patients of our Collective Garden.

At this time, we are looking to expand our Tissue Culture Laboratory. If you would like to help us GROW our Cannabis Tissue Culture Lab, and help raise the bar in our industry, please contact us immediately for evaluation.

Sexual propagation (seed production) has all of the above limitations as well as limitations governed by the genetics of each plant species. Infertility problems, offspring variability, the time required for plants to mature and flower, storage of seed and the fact that seed is often available on a seasonal basis only further complicates this method of propagation.

Over the past few decades, “Tissue Culture” has become an important method for the propagation of many plant species. This asexual method consists of aseptically growing plant tissue such as cells, meristems, shoot tips, embryos, Ovides, root or stem and leaf sections in a laboratory vessel containing a microbe-free nutrient medium under controlled environmental conditions.
This propagation method produces plants of uniform genetic makeup, increases the rate of plant production and has been used for the elimination of diseases in certain plants. 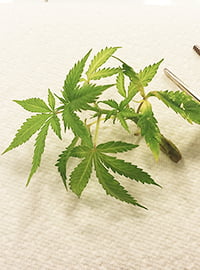 Tissue Culture in the Foliage and House Plant Industry
Tissue culture propagation has filled a number of needs in the foliage industry, including:
Rapid increase in numbers of new varieties, hybrids and hard-to-propagate varieties by conventional methods
Production of disease and insect-free propagation units
Reduction in space for stock plants needed in conventional production Uniformity and vigor of plants produced by asexual rather than sexual means.

In the past, when a sport or a new hybrid was developed, it took four to five years before sufficient stock could be grown to produce enough cuttings for the plant to be released to the trade. Now, through tissue culture, this time has been cut to one to two years.

If you consider the reduced time to release the plant material, as well as the absence of stock areas, this becomes a most beneficial economical process. These freed-up areas can be used for production space, which will yield a return for the grower.

In the past, when a new plant was found to be desirable, if it did not lend itself to asexual production or if it was sterile or a poor seed producer, it would never reach the marketplace in substantial numbers. Even if such a plant could be produced in limited numbers from seed, the offspring often varied in appearance from seedling to seedling, due to genetic variations. 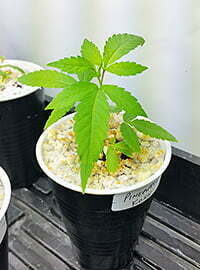 Seed Produced Plants Introduce Genetic Variability
Another aspect of seed produced plants is that the mother plants must be mature to produce seeds. In some areas this may take years, and there is still the chance of genetic variability. An example of this type of plant is Schefflera ‘Amate’. Without tissue culture it would have taken many years before this plant could have become available to the trade.

Benefit of Uniformity
Perhaps the greatest benefit of tissue culture is the uniformity of plantlets, both in appearance and growth habits. This allows the grower to consistently produce uniform crops and allow the end user to get replacement plants that are identical to the originals. Spathiphyllum Mauna Loa ‘Supreme’ TM produced by tissue culture in 1985 will be identical in genetic makeup, as well as appearance, to one produced in 2009.

Disease Free Plants
Another benefit of tissue culture is disease and pest-free plants. Through tissue culture plants can be guaranteed to be free of contaminants, thus reducing losses in production or in utilization. However, even though the plant may be produced disease and pest-free, it can easily be recontaminated if proper horticultural procedures are not followed.

Tissue culture can also be used to ensure the safety of the stock plant’s genes. Plants maintained in a test tube in a laboratory is a safer method of protecting availability than stock plants in a greenhouse, or a field where pests or natural disasters (such as hurricanes or a freeze) could destroy them. 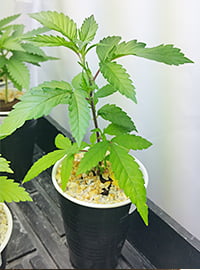 Small Plants and Mature Form
Another benefit of tissue culture is the production of small plants that have a mature form. A plant grown from a conventional cutting is the same age as the stock plant from which it came. Tissue culture plantlets, one-half inch tall, from a 5,000-year-old Redwood tree will have the same maturity as the original tissue. Thus, this plant would be mature in appearance and reproductive abilities even though it is only one-half inch tall.

Take for example a plant Norfolk Island Pine (Auracarica excelsa) produced by seed could be greatly improved when produced by tissue culture. In tissue culture production it would or should have mature foliage as well as be uniform in appearance from plant to plant. Also, when produced from seed, Norfolk Island Pine has a tap root, which is not desirable in container production. Plants propagated by cuttings have a fibrous root system which is better suited to container production.